An introduction to modulated MS gates for trapped-ions

We provide a toolkit to produce control enacting error-robust Mølmer-Sørensen entangling gates.  With a small amount of information about your system BLACK OPAL will present a control solution which simultaneously ensures a maximally entangling evolution and mitigates various error channels that typically arise in this gate. 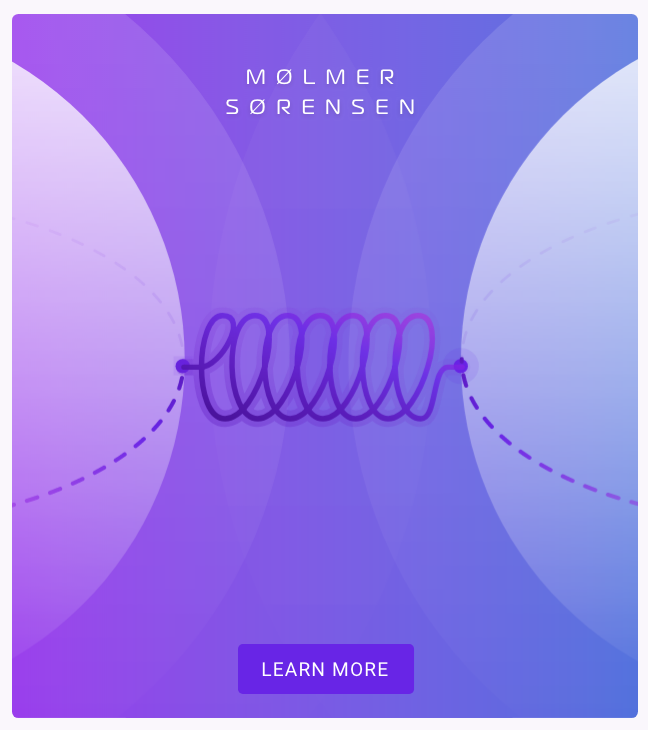 The Mølmer-Sørensen (MS) gate is routinely used in order to produce entangling operations between trapped atomic ions.  The gate fundamentally exploits the quantum coherent motional degrees of freedom for trapped ions in a shared potential in order to effect a net qubit-qubit coupling.  The interaction produces a qubit-state-dependent force which displaces the oscillator.  In a complex "phase-space" represented in an appropriate frame this results in a loop whose area corresponds to the net qubit-qubit entangling phase.

This approach - summarized as sequentially entangling qubit and motion and then disentangling the motional degree of freedom - is therefore susceptible to residual entanglement between the qubit and motion at the end of the operation as a loss channel.

Such residual qubit-motion entanglement may arise from trap-frequency fluctuations or noise in the mediating laser field (e.g. amplitude), and is manifested as incomplete closure of the phase-space loop.  Residual qubit-motion entanglement becomes a significant problem in circumstances where many "spectator" motional modes may have a small amount of entanglement with the qubit and their phase-space trajectories are not easily closed without dramatic extension of the gate duration.

The object of an effective error-robust control is therefore to ensure loop closure for all modes of motion - ensuring that this loss channel is mitigated.

We provide two distinct quantum control approaches to this problem:

Because of the nature of the dominant error mechanism in these gates, we will employ visualizations which focus on the evolution of the motional modes in phase space rather than e.g. using Bloch Spheres.  Full details on the underlying MS Control Hamiltonian appear here.

In this scheme all modes of motion may be simultaneously disentangled from the qubits at an arbitrary gate time and arbitrary laser frequency by modulating the difference phase between the so-called red and blue sidebands employed in implementing the gate.  The solutions (in the form of a sequence of phases as a function of time) may be derived either analytically or numerically, though the latter gives substantial benefits in cases with complex mode structures. 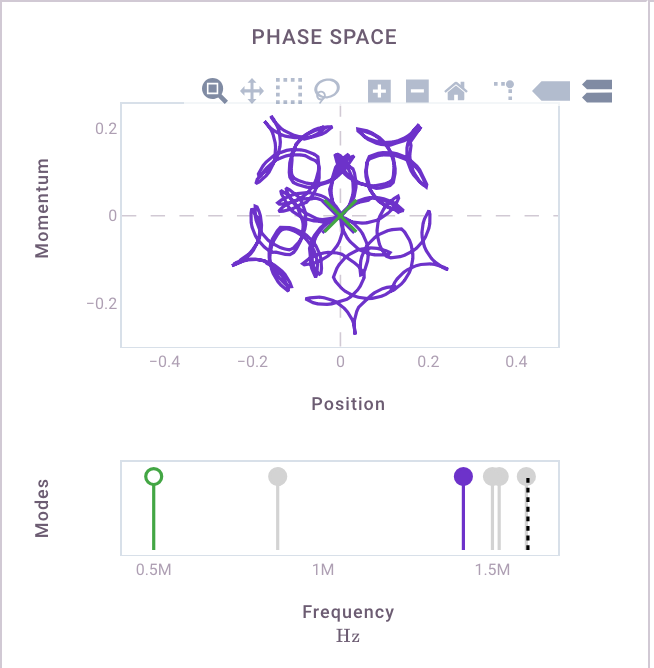 Robustness against parameter fluctuations may be achieved via appropriate construction of the gate; "concatenating" the phase modulation protocol enhances resilience against imperfections in the gate implementation as a particular mode is decoupled.  In addition, we automatically ensure that time-symmetrized solutions are employed which provide robustness against systematic calibration errors in e.g. the frequencies of motional modes.

This approach has the advantages of simplicity of implementation, compatibility with conventional rf electronics used in real experiments, robustness to time-dependent noise, and mitigation of unwanted ac stark shifts that can arise from modulation of the laser strength.  Further details and experimental validation may be found in the following references:

In this approach a system of equations is solved simultaneously either analytically or numerically in order to ensure that all modes of motion are de-excited at the end of an MS gate using this modulation scheme.  Again, robustness conditions may be built in through appropriate symmetrization of phase-space trajectories.

Further details on this approach may be found in the following reference:
“Optimal Quantum Control of Multimode Couplings between Trapped Ion Qubits for Scalable Entanglement,” Phys. Rev. Lett. 112, 19502 (2014).

A control solution for an error-robust MS gate is uniquely crafted for a set of input parameters.  Accordingly, a user inputs a small amount of information about laser settings and gate parameters, and builds a solution in a simple two-step process.   The required inputs are technical, but we try to make this simple to understand. 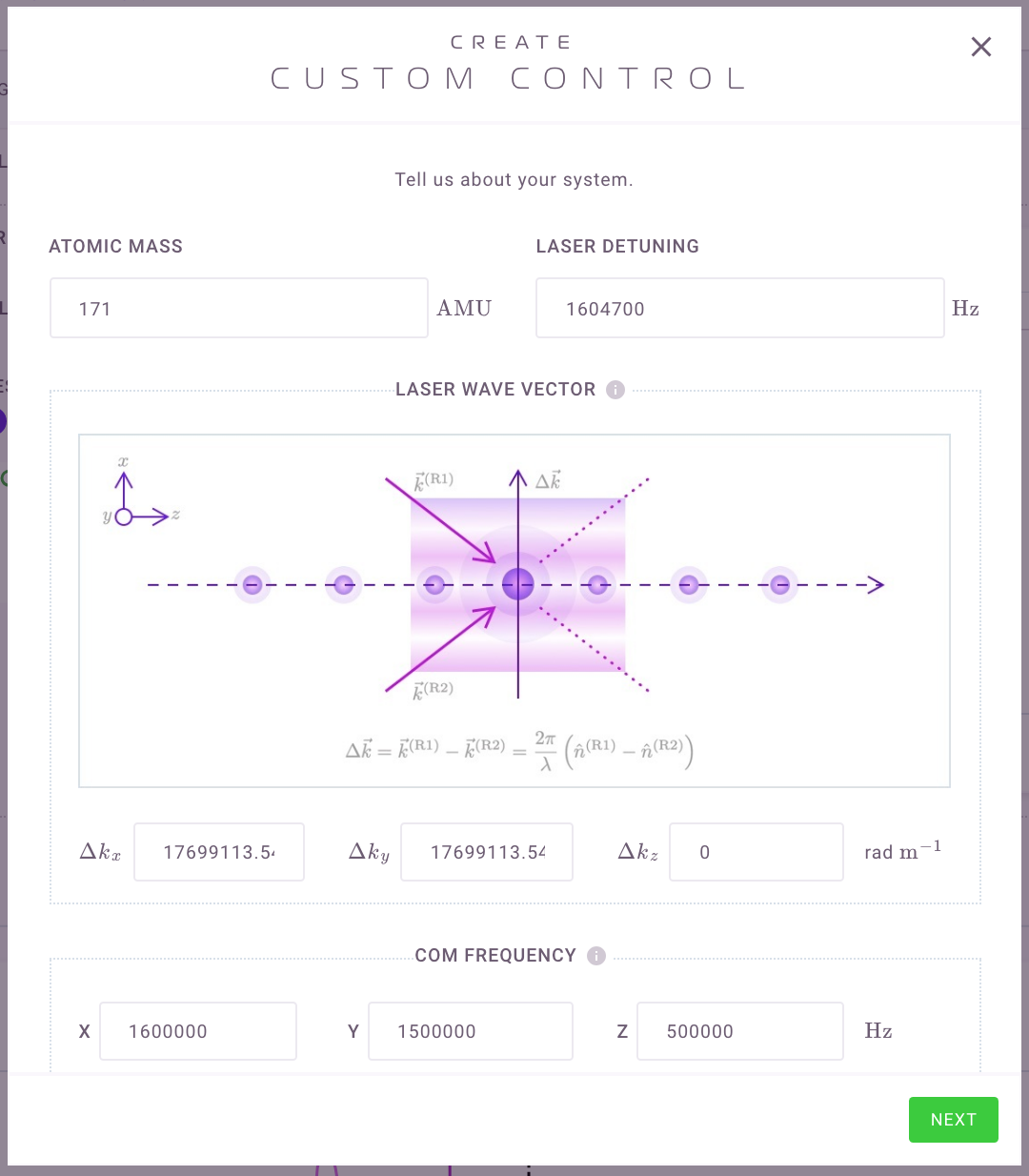 From this small amount of information we'll calculate all of the modes for your system; you can still edit these if you know exact parameters from your experiment.  Now simply select which modes to include in a control solution, the level of concatenation, and if preferred the order of loop closure.  Note that the colored-circle mode indicators can be dragged/dropped to change the order of loop closure.  Play around! 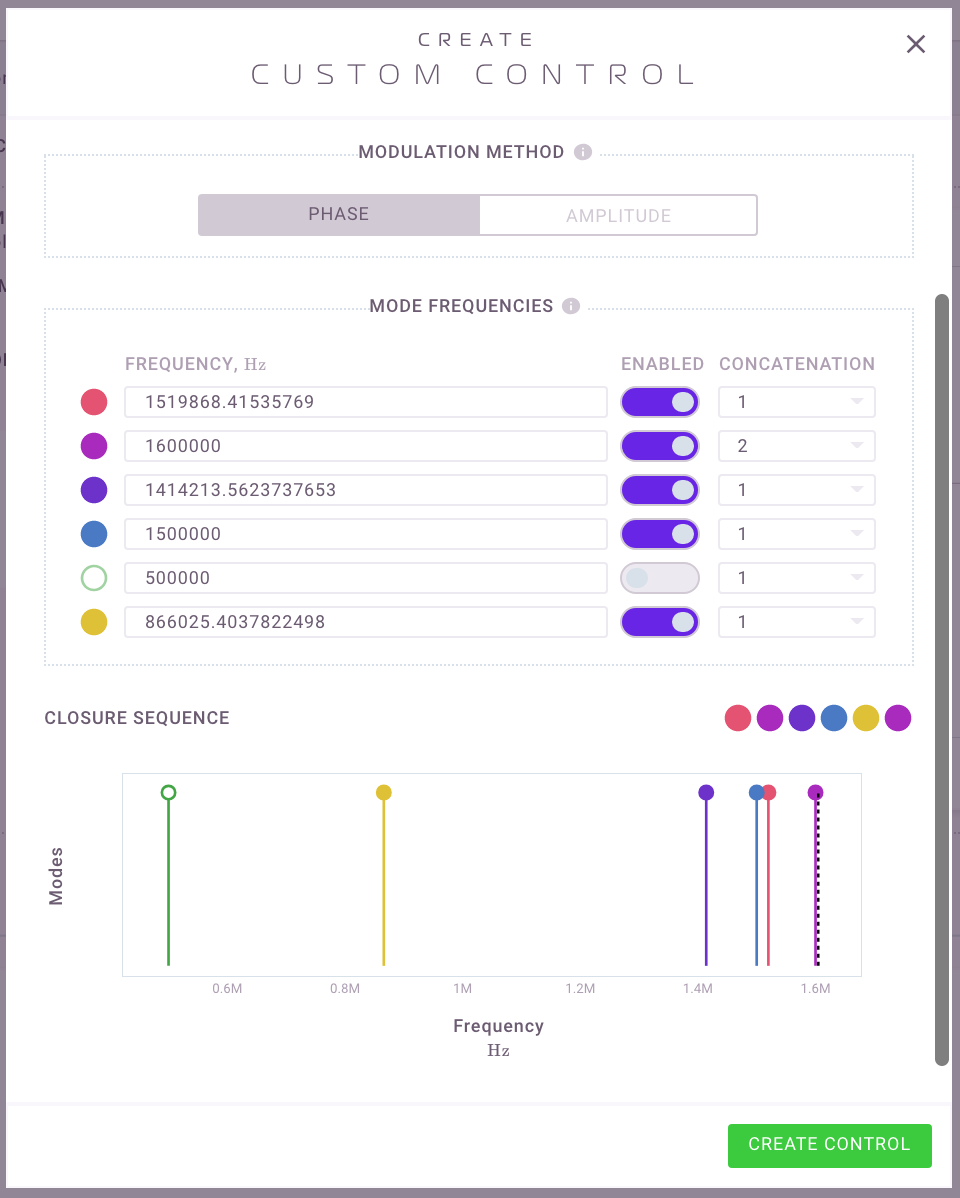 We provide simple interactive tools for you to explore and compare how loops are closed by a modulation procedure, the effects of concatenation, and differential ordering of loop-closure for different motional modes.  All of these parameters may be manipulated when creating a control.

Once a control solution is constructed, we provide various visualizations of control performance in the presence of both static mode-decoupling and time-dependent errors.   To start, we show the two-qubit populations that are typically measured in experiment as a function of the laser frequency.

You're always able to compare the novel control solution against the "primitive" benchmark, which makes no additional attempt to ensure mode decoupling at the end of the prescribed gate time. 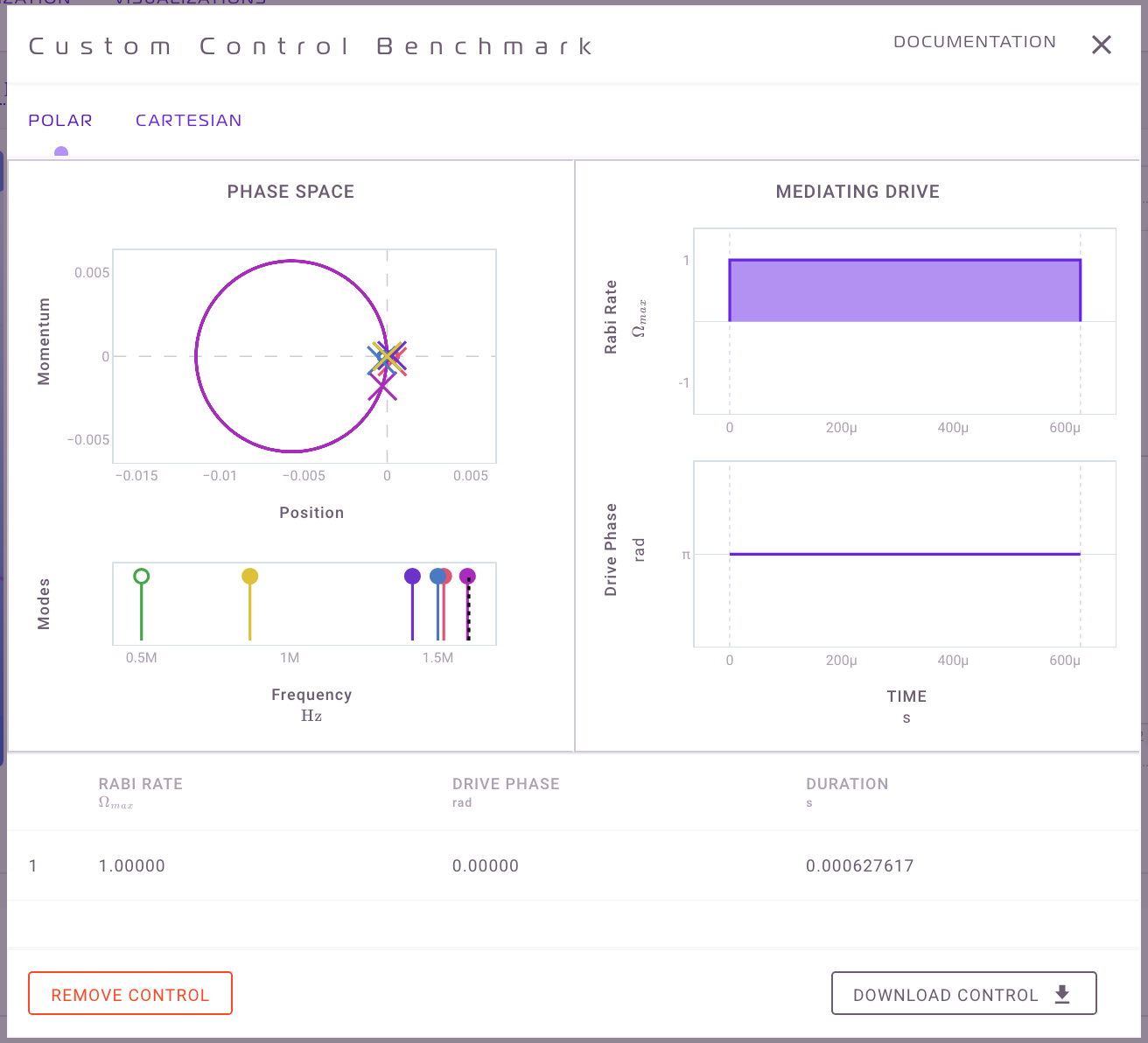 These include calculations of qubit populations and gate fidelities as a function of laser frequency, which give insights into robustness against systematic errors; robustness is manifested in the width in frequency of the area where the gate is effectively implemented.

In addition we have built a filter function framework allowing you to evaluate the sensitivity of a given control to time-varying noise.  As in the 1-qubit workspace, you can edit the underlying noise spectra (now associated with motional frequency fluctuations and and laser amplitude fluctuations) and calculate performance metrics based on this time-dependent noise. 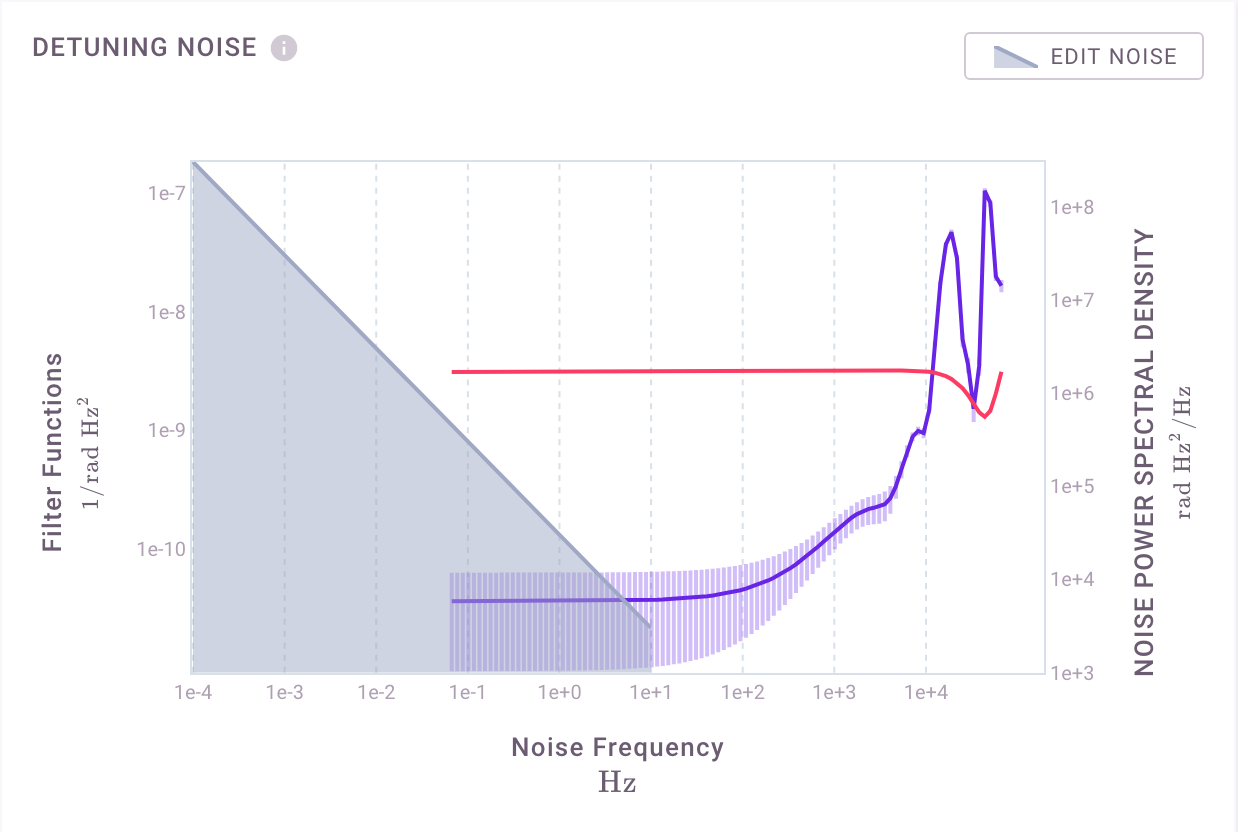